Seagrass in the Mediteranean 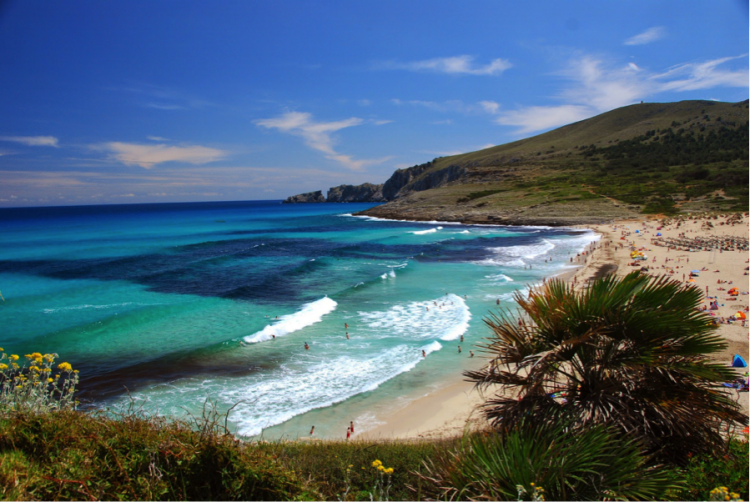 Figure 1: The island of Mallorca. Tourists enjoy the clean sandy beaches of Mallorca, which underwater seagrass meadows help provide. The seagrasses help maintain much of the seascape Mallorca is famous for. Photo: Lucie Debelkova

As summer sets in for another year, the island of Mallorca is flooded with tourists relaxing on the sandy beaches and swimming in the clear ocean water, taking in the natural setting with family and friends.

Unseen by these tourists, underwater meadows of plants called seagrasses are the backbone of the island's beautiful landscape. These meadows help maintain clean sandy beaches by moderating waves and settling sand out of the water, in addition to many other services. The seascape draws in over 9 million tourists to Mallorca per year (10 times more than permanent island residents), who contribute to more than half of the island’s economy.

The problem is that that meadows are in trouble: they are projected to shrink to 10% of what they used to be by 2049 due to climate change as well as local pressures like pollution. But conserving the meadows can also help reduce climate change: they have the highest soil carbon stock on earth. Research partners from the Balearic exemplar in the OPERAs project are promoting their conservation by quantifying this Blue Carbon sink. 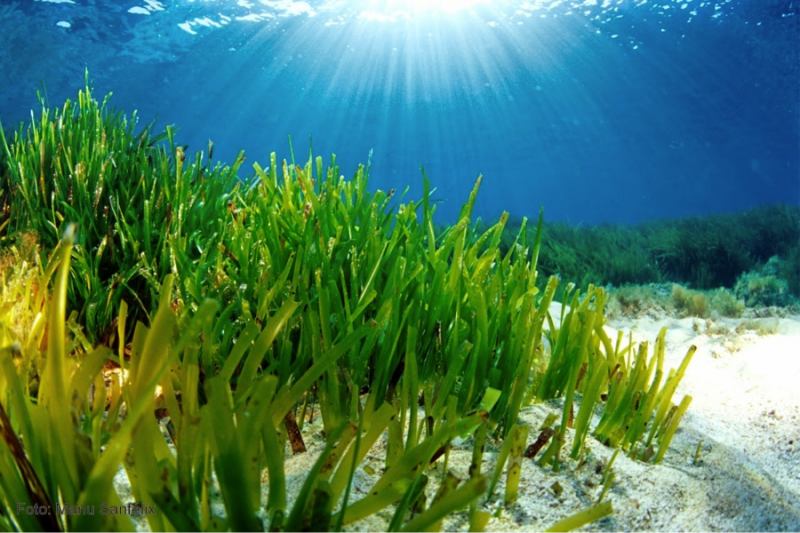 But tourists don’t care about carbon. In the summer of 2014, I surveyed 73 tourists on Mallorca about their preferences for 21 services that could be enjoyed during their visit. The benefit of “carbon storage” took the backstage, with only 1.7% of the tourist votes ranking it as “highly important”, next to “marine sanctuaries” and “knowledge of marine research”. Meanwhile - no surprise here - “clear ocean water” and “sandy beaches” stole the spotlight, earning tourist rankings of first and second place.

Figure 3: Benefits with high importance from a survey of 73 tourists on Mallorca. Each section represents the share of tourist responses for each benefit that was marked as high importance, including the 5-point Likert scale response of “very important” or “extremely important”. For example, 64 respondents identified “clear ocean water” as highly important, compared to 10 for “carbon storage”. Therefore, the section for “clear ocean water” is roughly 6 times the size of “carbon storage”. The darker colors with bold lines represents the benefits with majority high importance (top seven), while the light color indicates majority low importance. The red and blue colors are direct use benefits and indirect use benefits, respectively. The stars differentiate the benefits that tourists would not return without (top five).

While researchers promote the carbon sequestration capabilities of seagrass meadows, tourists are enjoying their benefits without understanding where they come from - only 11% in my survey knew seagrass meadows even existed. Of the benefits tourists highly valued, six out of seven were benefits they could directly use and experience, such as the clear ocean water and sandy beaches (Figure 3). In order to conserve valuable ecosystems, these benefits can be communicated in a tangible, accessible, visibly appealing way.

Unless you’ve been exposed to the language, the world of ecosystem services can be confusing and difficult to understand. For example, the cascade model is widely used in academia to relate environmental and social systems (Figure 4). This model does a great job in making the process cyclic, so it’s easier to see that human pressures such as urban sewage and boat anchoring are having an effect on the natural capital of seagrass meadows. However, this model is not familiar to most people outside of ecosystem services researchers.

But we can do even more – we can bring the concept of ecosystem services to life. With the use of 3D modeling software to showcase aspects people can understand, the ecosystems (and their benefits and pressures) can be put on Google Earth to make the information accessible to everyone. The benefits people enjoy (and which rake in the money) are juxtaposed against the pressures on the ecosystem, putting all of the relevant pieces on the same table. By illustrating the highlighted aspects from the cascade model, we can paint the big picture of how ecosystem functions support humans 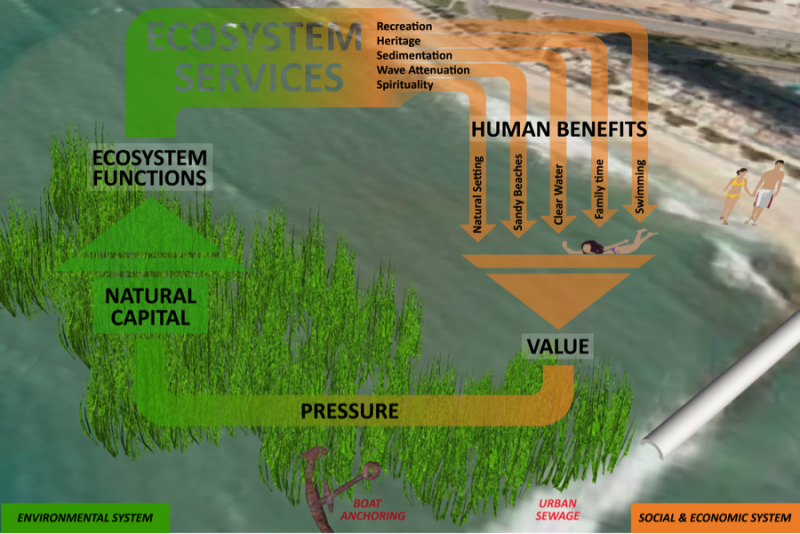 Figure 4: Cascade model overlay on Google Earth. The cascade model categorizes six main aspects within the environmental system and social & economic system. The cascade begins with natural capital in the en vironmental system; in this case, the seagrass meadows. The seagrass meadows perform ecosystem functions like photosynthesis for plant growth, which turn into ecosystem services like carbon sequestration. Ecosystem services is the bridge between the environmental system and social-economic system: it translates the normal ecosystem functions into services humans can benefit from. An example would be wave attenuation as an ecosystem service which translates into sandy beaches as the human benefit. These benefits have values (whether economic or social), which in turn apply pressures (through increased population on the island) of urban sewage and recreational boat anchoring.

Tourism is important to Mallorcan residents to maintain their livelihoods, and can potentially be used to help motivate seagrass conservation to reduce climate change. By making the big picture of benefits and pressures on seagrasses clear to people in the position of power, they can see what tourists really value, and understand how critical seagrass conservation is to protect these values and maintain their tourism industry. Tourists will be more inclined to support conservation if they understand where the benefits they value are coming from: the seagrasses. And if the tourists are paying more to conserve the seagrasses, then Mallorca can have more sustainable tourism operations such as stricter boating regulations, effective wastewater treatment, and commit to climate change mitigation as a region.

OPERAs is focusing on operationalizing ecosystem services, and we can make that connection between science and the public by showcasing (or marketing) what the paying population cares about. As sustainability scientists, we care about the environment. But for the millions of tourists flying into Mallorca each year, conserving the environment isn’t their highest priority, and especially not when on vacation. By effectively communicating the benefits of ecosystems to researchers, NGOs, and the environmental ministry of Mallorca, we can conserve the seagrasses by focusing on what the tourists already care about - relaxing on the sandy beaches and swimming in the clear ocean water, taking in the natural setting with family and friends.