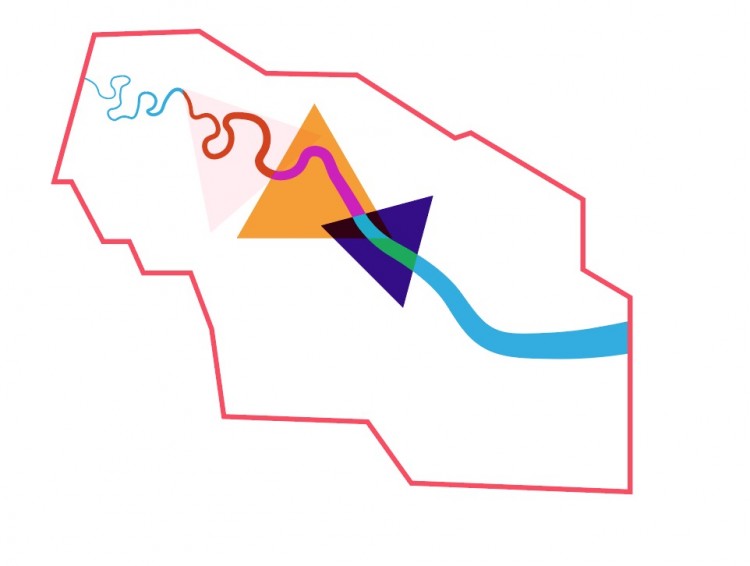 North-west of the Scottish capital, Edinburgh, lies the estuary fjord known as the Firth of Forth. The wide fjord springs from the river Forth, located in the Scottish lowland belt between Edinburgh and Glasgow, which flows to meet the sea at Grangemouth. This mix of fresh and saltwater rises and falls daily with the tide and creates important wetland habitat for many species, such as wading birds and spawning fish. But it is also an important area for settlements and industrial activities.

Unlike the usual image of Scotland, with rocky coasts, harsh highlands and deep lakes, this part of Scotland is characterized by an agricultural landscape with small towns, petrochemical industry, and intertidal habitats such as saltmarshes and mudflats.  It is this seemingly unusual Scottish landscape in figure 1a that became one of a dozen study sites in the OPERAs project, and my master’s thesis based at Lund University in Sweden, supervised by Kim Nicholas. 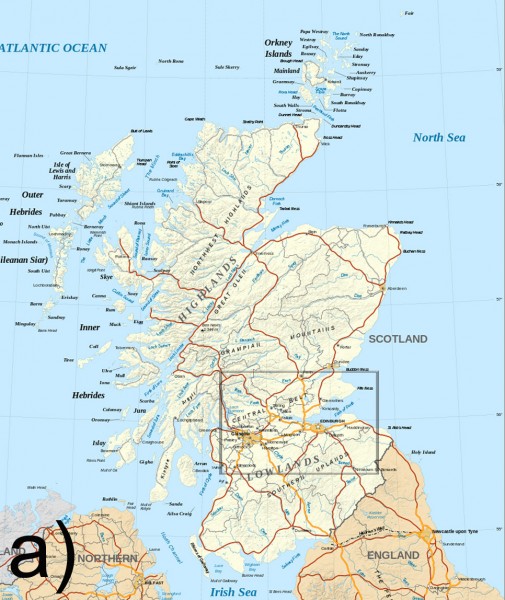 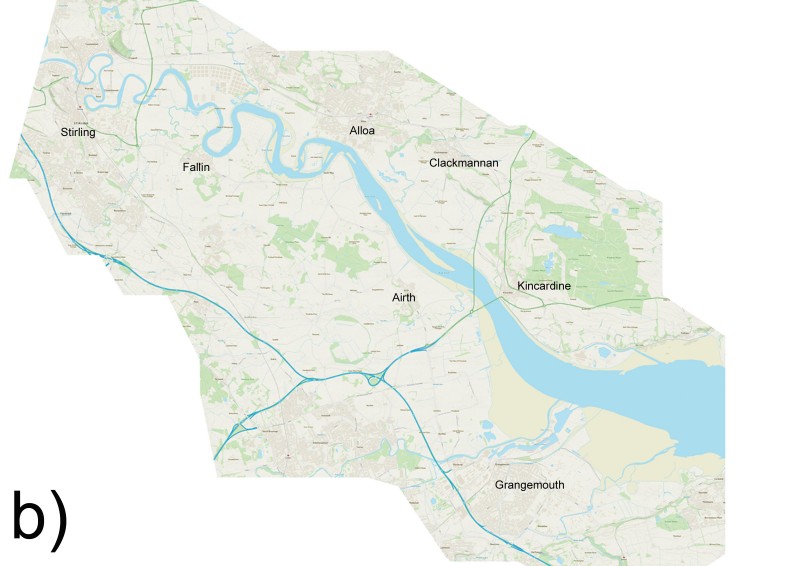 The stretch of the river between the towns of Stirling and Grangemouth is commonly known as the Inner Forth, shown in Figure 1b. The shoreline of the Inner Forth consists of large areas of low-lying fields that have been claimed from the sea through increased drainage and construction of sea walls, some 300 years ago. Today, land that was formerly wetlands (as seen in Figure 2a & 2b) is used for agricultural production, housing, industry, and recreation. 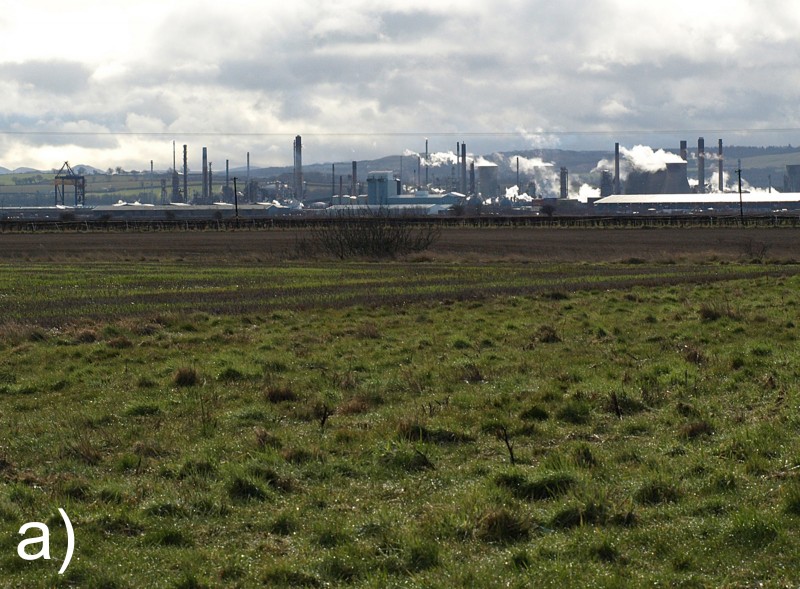 But this system is in trouble. Similar to other coastal systems around the world, the saltmarshes in the UK are under increased threat to disappear due to stresses from climate change. Along with them, critical species, habitats, and natural flood protection could be lost. The problem is two-fold: first, rising sea levels are expected to raise the average level of the water in the Firth of Forth estuary, drowning the land nearest the river. Further, storms bring in waves from sea (called storm surges) that periodically flood the land near the river. These storm surges are getting higher and more frequent, increasing the risk of flooding both for landowners of reclaimed land, and those further upstream in cities and towns. Currently, it is landowners who are responsible for maintaining the sea walls and drainage systems, and who have to bear much of the increased expenses with more frequent flooding in the future.

Recognizing this threat to the region, several governmental and non-governmental organisations have called for giving more space back to the river, to maintain both saltmarsh habitat and their flood protection benefits. This approach, called “managed re-alignment”, would involve lowering or removing the current sea walls and reconstructing them further inland, thus giving land back to the sea. This approach allows certain areas to be flooded regularly at high tide, thereby restoring the saltmarshes and supporting the species that are dependent on this habitat. Other areas could be given to mixed use: for example, under normal circumstances, open for grazing, but used as a buffer for storm surges and provide flood protection when the river rises above normal. However, such a transformation would require the approval of those who own the land, both private landowners and councils.

In the past year I have been to Scotland twice, working with the OPERAs exemplar based in the Inner Forth. During my research, I conducted 11 interviews with local landowners along the Inner Forth, including both councils, an NGO and farmers. I organized an exercise where participants sorted cards to determine which benefits they received from nature (ecosystem services) that they valued most, drawn from a comprehensive range of 38 services divided into three categories. Those are: 1) provisioning ecosystem services (e.g., cattle raising and crop production), 2) regulating services (e.g., natural flood protection and soil quality maintenance) and 3) cultural services (e.g., spirituality and cultural heritage).

I found that the three types of landowners present in the Inner Forth (farmers, local authorities, and an NGO) all had their distinct preferences (table 1). But in general, agricultural-related services were most important to farmers, while the councils and the NGO had different interest’s dependent on the goal they had for their land, for example habitat creation and protection for birds and marine life. Although there are many differences in what farmers, councils and the NGO considered the most important, there are some common denominators. One such denominator was the preservation of nature for future generations and enjoyment of nature. Those are aspects that could potentially be a uniting factor in the Inner Forth, where there is otherwise a seemingly large disagreement about the future development the area. 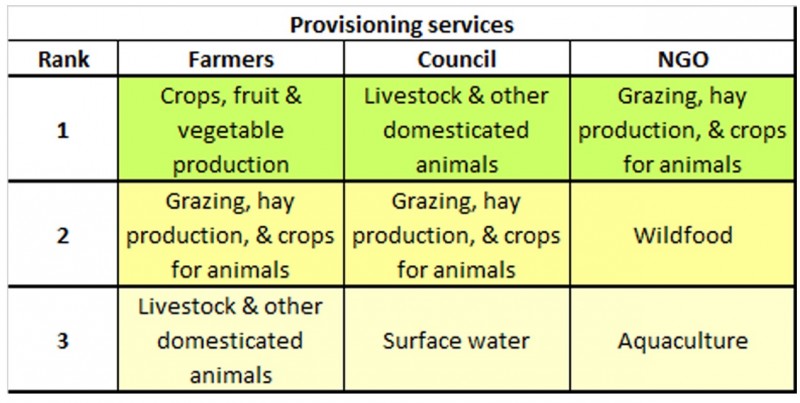 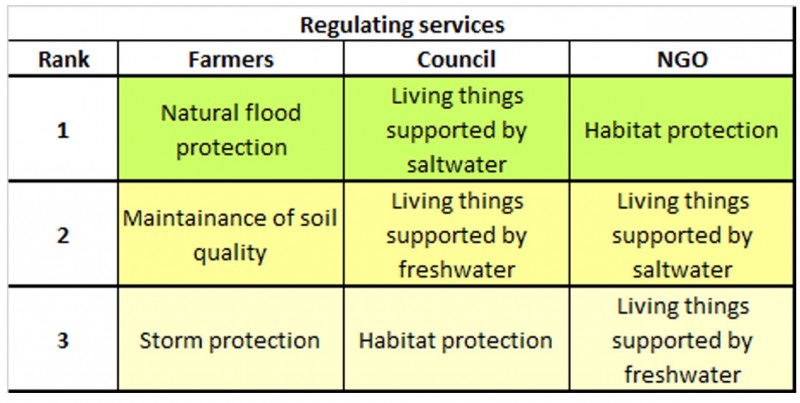 Once the landowners had been asked about the importance of the benefits provided by their land, I continued by asking questions about impacts of environmental changes and which strategies were used to cope with these changes. Weather-related flooding events were of little concern to many of the landowners. Only the two councils raised general concerns about flooding, but they had no site- specific concerns for their landholdings along the river. A greater worry was sea level rise: farmers were often concerned about the rising sea and combated this by improving and raising the sea walls. Since storm surges might worsen the effects of both sea level rise and flooding, one might think that landowners would see this as a threat to their land. However, from the interviews, I found that some landowners expressed concerns for storm surges, but they were more worried about the region in general and not so worried about their own land.

The discussion then continued by asking open-ended questions about the landowners’ involvement in the regional development and their attitude towards the suggested changes of a managed realignment. From this, I found that none of the farmers in the area felt included in the regional development. About half stated that they were not interested in these discussions, but the other half wished to be included. Some of them felt overlooked or poorly approached, and one farmer noted the need for organized participation of farmers and other local inhabitants in the area, saying: “ … people who just stay in the country should all be involved in deciding in what’s going to happen.” Similar concerns were raised among other farmers, who though they were not listened to.

In terms of relationships between different stakeholder groups, most farmers also expressed mistrust and disagreement towards other stakeholders in the Inner Forth, while both the council and the NGO that owned land in the area are deeply involved in the regional planning and did not express any feelings of exclusion. The NGO is seemingly the only stakeholder that has been having any type of dialogue with the farmers, but was not very trusted by them. One farmer described a preference “as a land manager I would like to keep an arm’s length from [the NGO]” who were seen as being “fairly robust in their beliefs.”

The disagreement between farmers and other stakeholders can largely be attributed the differences in interests, where a managed realignment would decrease the crop yield and grazing ecosystem services important to farmers (Table 1). The farmers’ negative attitude towards the managed realignment also seems to be deeply rooted in the history of the region. Many claimed that it goes against the interest of the farmers and that it is a part of their cultural heritage to keep the land productive. The land also produces a large share of their annual income, making some farmers dependent on the land for their livelihood. On the other hand, a managed realignment would help both governments and councils to improve flood protection while at the same time improve the protection of certain wetland species.  Ultimately, decisions to manage the Inner Forth raise the question: who decides which ecosystem services are most important?

One of my major conclusions is that the lack of involvement of farmers is causing an unfavourable situation for future land planning in the Inner Forth. Farmers are the legal owners of a majority of these former wetlands, and having them excluded from the discussions makes any type of wetland re-establishment problematic. On the other hand, a continuation of the current land use would most likely lead to deteriorating saltmarshes, increased risks of flooding and more destructive floods.

So in this polarized situation, is it possible to bridge between different interests and find a sustainable estuarine development? Several scientific studies suggest, yes! But such a solution would need to be based on the three pillars of sustainability science (environment, economy and social welfare), while at the same time acknowledging and including a time frame of past, present and the future. I believe that by further including the farmers in the development in the Inner Forth, some of these aspects would be given a better representation, thus improving the development towards a sustainable estuarine. In the end, the farmers’ stakes are high and they have legitimate claims and the right to be included.

I am currently involved in ongoing research examining the relations between stakeholders in the Inner Forth - stay tuned!

For more information on the topic, please see my master thesis:

“Bridging to the common ground, adapting to climate change through sustainable estuarine land use: a study of the Inner Forth, Scotland”.